Working in social media can be challenging. Staying atop new trends, features and functions in an ever-changing digital world is non-stop. This challenge only increases when working in a regulated industry, and I have found many professionals in the mortgage industry are hesitant to send tweets of their own on Twitter.

What people may not realize is that Twitter can offer you a number of benefits, without ever sending a single tweet. Having a Twitter account opens the door to participation. But instead of tweeting, try using Twitter as a listening tool to stay engaged with your industry and businesses. Here are three Twitter secrets that don’t require you to tweet.

I love lists. Twitter Lists is one of my favorite Twitter secrets, and are the perfect way to organize all of the people and companies that are of interest to you on Twitter. Adding a Twitter user to a List does not require you to follow them. This is important to note when considering how you choose to use Lists. I use Twitter Lists to manage who I want to listen to. I also use Twitter Lists as a way to monitor the activity of users, who I do not wish to follow. Lists can be public or private, and provide the flexibility to stay in touch with your audience so you can listen more effectively.

Setting up mobile notifications on my phone is another way I listen and stay connected to companies, schools, news sources and people that matter most to me. A Twitter notification will alert me, via my phone, when that specific Twitter user (Twitter handle) has tweeted. This is important if you are interested in knowing what a company or person is saying on Twitter in real-time. It also helps you to develop a better understanding of what that user likes to tweet about or what their interests are. Twitter notifications do require you to follow that user on Twitter. For example, I have notifications for MGIC turned on so I can stay up-to-date with mortgage industry news and events. 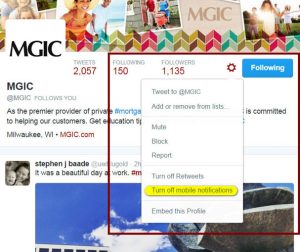 Being aware of what others are saying about you or your brand on social media is incredibly important. A simple Google search on ‘monitoring tools for Twitter’ reveals that there are a number of applications available to users. Some are free and some cost money. Most offer you the ability to monitor and analyze who is saying what on any topic or term you decide. The true value of monitoring tweets is that it allows you to stay informed about the industry you serve and the world you live in.

These Twitter secrets are three ways to rethink how you can use Twitter in a regulated industry and will help guide your social media use. Finding a balance with social media is the key. Participating does not mean you need to abandon the use of popular platforms, like Twitter. Hopefully you now have a bit more information on how you can use Twitter to stay engaged and informed, without ever having to actively tweet.