“The supply of credit dropped in December to its lowest since February 2017. The decline was driven by a sharp decrease in the conventional credit space, as we saw the expiration of the Home Affordable Refinance Program (HARP),” said Joel Kan, MBA’s Associate Vice President of Economic and Industry Forecasting. “Credit availability in government loans was stable over the month, ticking up slightly. We also saw a decline in high balance and super conforming programs, which drove the decline in the jumbo index.” 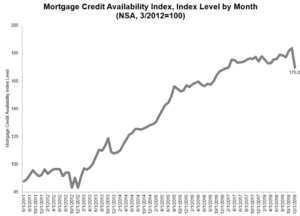 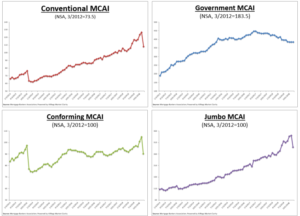 The Conforming and Jumbo indices have the same “base levels” as the Total MCAI (March 2012=100), while the Conventional and Government indices have adjusted “base levels” in March 2012. MBA calibrated the Conventional and Government indices to better represent where each index might fall in March 2012 (the “base period”) relative to the Total=100 benchmark. 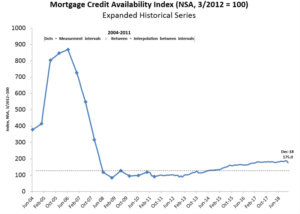 Data prior to 3/31/2011 was generated using less frequent and less complete data measured at 6-month intervals interpolated in the months between for charting purposes.

ABOUT THE MORTGAGE CREDIT AVAILABILITY INDEX

The MCAI provides the only standardized quantitative index that is solely focused on mortgage credit.

The MCAI is calculated using several factors related to borrower eligibility (credit score, loan type, loan-to-value ratio, etc.). These metrics and underwriting criteria for over 95 lenders/investors are combined by MBA using data made available via the AllRegs® Market Clarity® product and a proprietary formula derived by MBA to calculate the MCAI, a summary measure which indicates the availability of mortgage credit at a point in time. Base period and values for total index is March 31, 2012=100; Conventional March 31, 2012=73.5; Government March 31, 2012=183.5.

The MBA updated its methodology in August 2016 which produced an updated set of index values (historically and moving forward), for more information on this updated methodology please visit http://www.mba.org/MortgageCredit and read the FAQ and Methodology documents. Any historical data obtained prior to August 2016 is not comparable to the current, revised index and should be replaced with the new history.

Mortgage Delinquencies Decrease in Fourth Quarter of 2019
WASHINGTON, D.C. (February 11, 2020) — The delinquency rate for mortgage loans on one-to-fourunit residential properties decreased to a seasonally adjusted rate of 3.77 percent of all loans outstanding at the end of the fourth quarter of 2019, according to the Mortgage Bankers Association’...

Commercial and Multifamily Mortgage Maturity Volumes to Increase 48 Percent in 2020
SAN DIEGO (February 9, 2020) — $163.2 billion of the $2.2 trillion (7 percent) of outstanding commercial and multifamily mortgages held by non-bank lenders and investors will mature in 2020, a 48 percent increase from the $110.5 billion that matured in 2019. That is according to the Mortgage Bank...

Commercial/Multifamily Borrowing Climbed to a New High to Close out 2019
SAN DIEGO (February 9, 2020) — A 7 percent increase in commercial and multifamily mortgage originations in the fourth quarter of 2019 capped off what was a strong 2019 for the market, according to preliminary estimates from the Mortgage Bankers Association’s (MBA) Quarterly Survey of Commercial/M...

Mortgage Applications Increase in Latest MBA Weekly Survey
WASHINGTON, D.C. (January 29, 2020) — Mortgage applications increased 7.2 percent from one week earlier, according to data from the Mortgage Bankers Association’s (MBA) Weekly Mortgage Applications Survey for the week ending January 24, 2020. This week’s results include an adjustment for the Mart...

Tom Hunt DOBI Asst. Director Banking Division Retiring after 30 years in Government Service.
From the Desk of E. Robert Levy, Esq. Tom Hunt will be retiring as Assistant Director, Banking Division, at the Department of Banking and Insurance after almost 30 years of government service in New Jersey. Tom has been a key player in the Department’s supervision and regulation of mortgage bank...

CREF Outlook Survey: Majority of Firms Expect Originations to Increase in 2020
WASHINGTON, D.C. (January 9, 2020) — Following what is expected to be a record year of lending in 2019, commercial and multifamily mortgage originators anticipate 2020 to be another strong year. That is according to the Mortgage Bankers Association’s (MBA) 2020 Commercial Real Estate...

Get Our Latest Updates Here